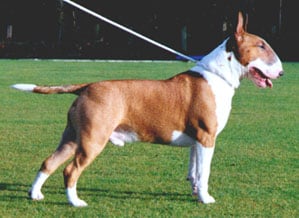 The Bull Terrier hails from England. This breed was bred for dog fights. Bulldogs were mated with various terriers to get these traits: the attentiveness and agility of Terriers and the persistence and high pain threshold of the Bulldog.By 1850, James Hinks was breeding the Bull Terrier with the White English Terrier and others. Dalmatian blood was used to get their gracefulness in appearance and gait. He bred these dogs to obtain a dog that was more gracefully proportioned, for a lengthier head, and to scuttle the bowed legs.

This dog was also developed to guard his master, but not to instill hostility. Ted Lyon bred a colored Bull Terrier because albinism and deafness came with the white dogs.The Bull Terrier Club began in Great Britain in 1887. The club published a standard in 1888. The AKC recognized this breed in 1895. The American Kennel Club accepted the separate sizes in 1992. They are the Standard Bull Terrier and the Miniature Bull Terrier.

This breed needs the company of its master or family. A Bull Terrier bonds strongly and is very affectionate. It doesn’t adapt well to being alone. It likes kids, but is a strong dog and it shouldn’t get too wound up around kids. Some people recommended keeping this breed away from small kids. Others say it is good with kids. It needs exercise each day. The coat needs brushing weekly and a towel rub down using a damp towel makes the coat shiny. 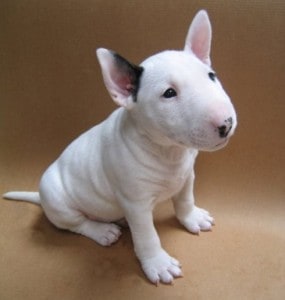 The coat is short, flat, and rough. The colors are white, brindle, red, black, fawn, and tri-colored.

This breed has a huge amount of energy and needs to be played with each day. He needs plenty of attention and companionship. Ignoring him will cause boredom and he will get into trouble. 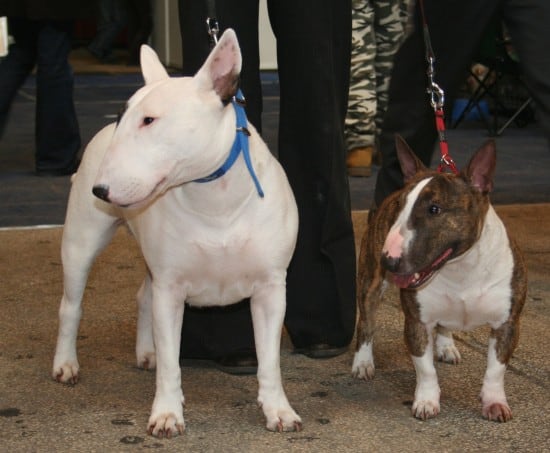