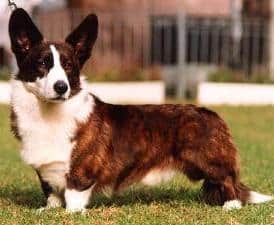 It is thought that the Celts came to Cardiganshire, Wales with the Cardigan Welsh Corgi in the 12th century. This breed is descended from the Teckel group of dogs. Once tenant farming had begun, the Welsh tenant farmer, called a crofter, taught the dog to separate the cattle herd out over more acreage, instead of herding them together. The reason for this tactic was that the amount of acreage he could use was measured by the number of acres his cattle used. The dog barked and nipped the heels of the cattle to move them further out into more acreage.

The Cardigan Welsh Corgi also killed vermin and was a watchdog. Later, the once common lands that the crofters utilized were divided amongst the crofters. Thus, many crofters didn’t find a need for the little dogs, though some kept them for pets and guard dogs.

The elemental strains of the contemporary Cardigan Welsh Corgi are derived from the Bronant Corgi, which is labeled from its originating town. In England, the two types of Corgi (Cardigan and Pembroke) were thought of as one breed until 1934. The first of this breed hit the shores of the U.S.A. in 1931; it was brought to the U.S. by Mrs. Robert Bole, specifically to Boston. The AKC gave this breed recognition in 1935.

This breed can adjust to living in the city or the countryside. It needs exercise each day. Such as walking and playing. They have a lot of energy. They like fetching balls. Its coat needs brushing once each week. Their backs can be hurt, if not picked up correctly. Put a hand aft of the dog’s front legs and
the other close to the hindquarters when lifting. This breed shouldn’t be allowed to jump from furniture or run on stairs. 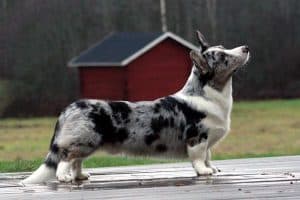 This dog is a low rider. It has big, erect ears and a tail unlike the other Corgi. The tail is bushy. The legs are short and the body long. The eyes are dark. If it is a blue Merle Corgi, it can have blue eyes.

The coat is double and medium in length. The outer coat is somewhat rough. It is basically smooth and resists weather. The inner coat is downy, thick, and short. The colors are brindle, black, red, sable, and blue Merle. These colors vary in their shades.

This breed is loyal and affectionate. It is sometimes reserved with strangers. They may herd kids as in nipping their heels. This habit can be removed by training. It is an even tempered breed.