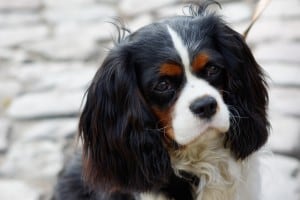 In the 16th century, the English royalty favored a diminutive form of the spaniel. One name for them was the Spaniel Gentle. During cold weather Gentlewomen took these lapdogs with them for warmth during carriage rides. Charles II had several of these dogs.

While King William the third and Mary the second ruled, the spaniel with a long nose lost popularity. The Pug was popular in the Netherlands and it is surmised that spaniels were bred with pugs. William had Dutch ancestry. The spaniel acquired some Pug features. In the middle of the 19th century breeding and showing dogs grew in popularity and the looks of the King Charles Spaniel changed a good bit; his size decreased, his head assumed a dome’s shape, the muzzle shortened, and the nose became pushed up. 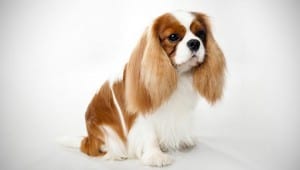 The Cavalier King Charles Spaniel is companionable and likes children. He trains well. His coat needs to be brushed every week. It doesn’t require extensive trimming, though trimming the fur on his rump to be hygienic is recommended. He likes exercise, but enjoys a nap too.

He has big hanging ears, big eyes, and is of a robust build. The coat is silk-like, moderately long, and straight. The colors are blenheim, tricolor, ruby, and black and tan .

The hind legs propel his movement, which is graceful. Looking at him at his side view the lengthy stride is noticed.

He is affectionate and a good friend. He is a social dog and friendly. The Cavalier King Charles Spaniel is playful and gentle. He does well with other pets, but might chase birds.