If you’re a parent, you know how hard it can be to get children to brush their teeth regularly. So when your veterinarian told you that you should be brushing Bandit’s teeth, you probably had visions of chasing him around the house, wrestling him to the floor and placing your tender fingers not just near but on his very sharp teeth. Good news! If Bandit is like most dogs, he will actually enjoy having his teeth brushed – maybe not the first time, but it won’t take long before he sees it as a treat.

Dogs’ teeth need to be brushed not to keep cavities away – they don’t actually get cavities the way we do-but to remove plaque and tartar and to prevent gingivitis. Not only will these give him “doggy breath” and possibly cause problems with loose or aching teeth, but they can also harbor infections that can travel to Bandit’s heart and make him very ill, perhaps fatally so. So to ensure that you do your part to help keep Bandit out of the doggy dentist chair, here are some tips: 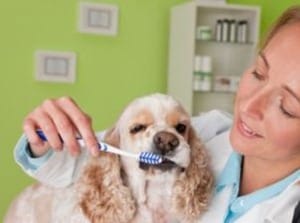 Accustom your dog to having you touch his mouth. Before you ever approach Bandit with a brush and paste, spend some time playing with his mouth. Pull his lips back, touch his teeth, and just generally get him used to your touch. If he resists, or grows anxious, continue doing this a little each day until he accepts it. When he’s used to it, dab a little of the dog toothpaste on your finger and let him lick it off like a treat.

Start simple. Use a wet cloth or a piece of gauze at first and just gently rub the easily accessible front teeth. When you are through, give Bandit a dab of the paste as a treat.

Choose the right time. The best time is when Bandit is least likely to put up a fuss. For most dogs that’s when he’s a little sleepy from having exercised. Don’t wake him up from a nap to brush his teeth, though; he may react in much the same way you might.

Don’t use human toothbrushes. They are much too stiff, even those made for children. Buy one especially made for dogs. These usually have long handles, extra-soft bristles, and a head that’s angled to make it easier to reach all those teeth. There are also brushes that you just slip over your finger, which some people believe makes it easier and more effective.

Brush correctly. Don’t leave the paste sitting on top of the bristles. Work it down deep between them. When you start brushing, place the bristles at a 45 – degree angle to tooth at the place where it meets the gum. Gently work the ends of the bristles close to the base of the tooth and between the teeth, moving the brush head in a roughly oval motion. Brush one or two teeth at a time as well as the gum in that area, for about a dozen back – and – forth motions, then move on to the next teeth.

Use doggy toothpaste. This is not a marketing ploy to get consumers to spend even more on their pets than they already do. There really is a difference between the pastes we use and those designed for dogs. Ours tend to have baking soda, detergents and salt in them, and these are neither good nor useful for dogs. While dogs’ pastes may contain fluoride, but look for one that doesn’t as fluoride in large quantities is poisonous to dogs, and if Bandit acquires a taste for the paste he could make himself very ill. (It’s not as though dogs can rinse and spit.) The pastes should, however, include enzymes that work on the plaque. Most veterinarians suggest pastes that include both chlorhexidine (an antiseptic) and sodium hexametaphosphate (which fights tartar). But the most important difference is the flavor. Dog pastes do not taste like mint or fruit but like chicken, beef and other dog-friendly flavors. This is the crucial element in making the tooth brushing into a treat.

Don’t expect diet or chews to do the work. While dental-specific kibble, rawhide and other chews-especially those treated with sodium hexametaphosphate – can help fight the visible buildup on Bandit’s teeth, they do nothing for the bacteria, which is much more of a health issue than a cosmetic one.

If you can’t brush your dog’s teeth, find someone who can. Although this is not a difficult process, some people just don’t seem able or willing to brush their pet’s teeth. Rather than just letting the matter go, make sure to take Bandit to see the veterinarian for regular cleanings. It’s a lot more expensive than doing it yourself, but if it’s the only alternative, that’s the way to go.

Talk to your dog. Speak to Bandit in a soothing voice, praising him for his bravery and wonderful behavior. When you’ve finished, give him a treat: preferably a dab of the toothpaste – not something that will stick to those newly shiny teeth!