The common flea can leap up to a hundred times its own height and land on Spock as he trots past, there to dine with impunity on the proteins and lipids so abundant in his doggy blood. They are hard to catch, nearly impossible to squash, and cause much more discomfort than you’d think possible of something no bigger than the head of a pin. Then there are ticks: unlike fleas, ticks can’t jump at all but must wait for Spock to stroll close enough to the blade of grass they cling to that they can latch on.

They then burrow deep into his fur and anchor themselves in Spock’s tender skin with their hypostome, a straw-like extractor that lets them gorge themselves on his blood until they swell to the size of a grape and fall off. 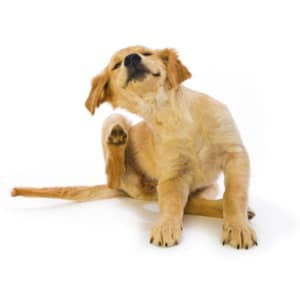 Not only do these two unpleasant parasites make Spock itchy and uncomfortable, but they can also make him sick. In the insect world, ticks are second only to mosquitoes in their ability to transmit diseases—among them relapsing fever, Lyme disease, tularemia, equine encephalitis, and Rocky Mountain spotted fever. Fleas, you may recall from high school history, played a major role in spreading the bubonic plague, and are also capable of passing on typhus and—more commonly these days—tapeworms. Mosquitoes are known for spreading malaria and the West Nile virus.

Years ago we treated these infestations with powders and chemically treated collars, both of which were only moderately effective. Today we use a two-pronged approach: pest control and prevention. It is often said that after an apocalypse the world would be populated only by those hardy, horrible bugs, cockroaches. They would likely have to share their space with fleas, which are also quite adaptable. Adult fleas lay their eggs on Spock, but these eggs are brushed off and land everywhere—the carpet, the couch, Spock’s bed—and these resilient eggs hatch within days to produce larva that munch happily on whatever organic material they happen to encounter.

After a week or two, the larvae wrap themselves in a hard-shelled cocoon or pupa, and emerge as six-legged bloodsuckers ready to terrorize Spock—and you. The pest control portion of keeping Spock bug-free usually involves large-scale chemical spraying by entire communities or counties, in the case of mosquitoes, and smaller-scale chemical treatments by homeowners, in the case of fleas and ticks.

Large-scale treatments can be ground-based (trucks) or air-based (crop-dusters). The chemicals used are most often synthetic cousins of pyrethrums, natural pesticides found in chrysanthemum flowers, although they sometimes contain additional active ingredients to strengthen the pesticide properties. While residents are always assured that these chemicals are not harmful to humans or pets, some environmental groups disagree. The same is true with the pesticides applied by homeowners themselves. The best rule of thumb is to use as little as possible, to avoid directly spraying things that might be in frequent skin contact, and to keep Spock from drinking out of any pools or puddles that you have recently treated. If you are using indoor foggers, make sure you cover not only your own dishes but Spock’s food and water dishes as well.

Fortunately, preventing fleas, ticks and even mosquitoes from hopping onto Spock has become much easier and far more effective than in the past, and has thus far proved safe when used according to instructions. There are dozens of products available from sprays and dips to pills, drops, and topical spot treatments.

Here’s a quick overview of what’s available for Fleas and Ticks:

Advocate—active ingredients are imadacloprid, a neonicotinoid that binds to receptors in the insects’ central nervous system causing paralysis and death in fleas, and moxidectin, a milbemycin that interferes with fleas’ nerve transmission. Spot treatment.

Capstar, Johnsons—active ingredient is nitenpyram, which binds to receptors in the insects’ central nervous system causing paralysis and death in fleas. Tablets.

Program, Program Plus—active ingredient is lufenuron, does not kill fleas directly but interferes with its development and prevents larva from hatching. Injection, tablets, suspension.