Housebreaking a dog is not an easy task, but understanding a dog’s behavior is the first step required in any type of training. Dogs are predatory animals and hence, the basic behaviors of a dog, remain the same. There are certain rules that you must follow to control your dog’s actions. The best way is to adjust to your dog’s behavior and not being harsh on them.

You may find it strange, but it is true that most animals do not foul their beds by instinct. The same applies to dogs. The mother dog keeps the ‘den’ clean till the puppy is four weeks of age. Thereafter, the puppy is taught to use the area away from the bed as the bathroom. However, this technique may not be practical enough for you. 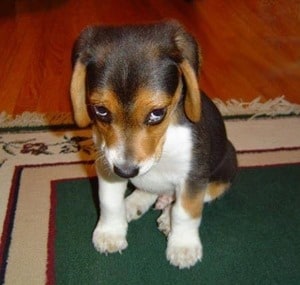 You may follow a different method for house breaking a puppy. Let us understand your dog’s psychology first. Your dog considers the whole house, as one big room. Asking him not to use the bathroom may not be a successful trick as your dog thinks that the word No means the whole house. You must try to teach your dog to visit the appropriate place to attend the nature’s call.

House breaking a puppy is not an easy process. It takes a lot of patience and hard work to carry out this procedure. The procedure must be followed step by step to achieve the goal. One effective method is paper training.

First, start off by training your puppy to use a newspaper as the bathroom. To practice this step, confine your dog in a small area (room, barricade, or a small section of a large room). Now, cover the entire floor area with newspaper. This will leave no choice for your dog but to do its business on the paper. Follow this procedure for about three weeks and then reduce the covered area gradually. As the time passes by your dog starts using the newspaper for its job and not the floor. If this is not the case, in first three weeks, do not lose heart and start again from the scratch. It takes a lot of patience to house train your dog or a pup. The above-mentioned training also requires discipline and consistency on your part.

Take Him Out Often

It is also necessary to take your dog out often in the morning, a couple of times during the day, and before bed at night. If possible, consider placing newspaper outside, as it can help to facilitate the transition. Do not forget or fail to praise your dog if it uses the paper. Stop putting the paper outside after a couple of weeks, when your dog gets in to a habit of relieving itself on the newspaper.

Remember that your dog will never tell you that it needs to be let outside. You have to try and understand it by looking at his behavior. Your dog may give you an idea of what he wants by sitting in front of, and staring at the door. You are supposed to learn to interpret this behavior.

Remember, a lot of diligence and patience towards house training a puppy will not go in vain. It will eventually be rewarded with a well trained dog.

Ideally, house training a dog that’s still a puppy is the fastest way to avoid these types of problems later on once he’s grown. However, if you acquired a dog when he was already an adult, and he still doesn’t have this problem under control, house training a dog is no different than if he were a puppy. Provided you’re willing to put forth the effort, and it does take effort, you and your dog will be a much happier team for the rest of his entire life.

How Difficult Is It 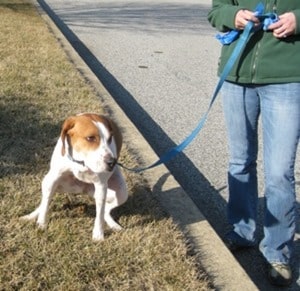 First of all, you can expect it will take on average, two weeks of concentrated effort on your part. You should never let your dog roam free throughout the house until he can be trusted not to go potty in the house. It’s also important to know that once he goes, he’ll be more likely to go in or near that same spot again. Generally, dogs of any age don’t like to potty where they sleep, so if you keep them confined in one specific area, it’s a pretty safe bet they won’t go there.

The best way to approach house training a dog is to know where your dog is and what he’s doing every moment. Since that isn’t always possible, you should keep him in a crate where he’s able to stand up and turn around without being cramped, yet without having any extra space where he can relieve himself.

Are Doggy Pads Any Good?

Some owners like to train their dogs on doggy pads. However, most trainers will discourage this since you end up having to train them twice; once on the pad and then again outside. It’s actually much easier to train them to go outside initially even though at first, it takes a greater effort on your part. In the end, you’ll save yourself a lot of time house training, and you’ll save money that would be spent on those very expensive pads.

When Does a Dog Need to Go

You can expect that your dog will need to go outside immediately after he eats, after he wakes from a nap, the first thing in the morning, and during or after a very robust play period. It will help if you have him on a feeding schedule at regular times of the day. Without leaving food out for him to nibble on whenever he chooses, you’ll find that after a few days, his bowel movements will have become regulated making it much easier for you to know about the time he’ll need to go out. You can do the same thing with his water. Just make sure you give him a drink about every three hours and let him drink as much as he wants at those times. Then take him outside.

Stick to the Schedule 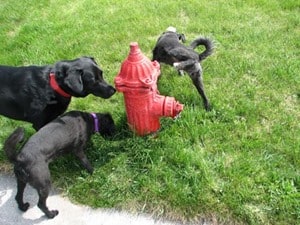 Keeping all of these things in mind, the procedure for a day would be like this. He sleeps in his crate overnight and is taken outside first thing in the morning. Then he’s fed and given water and taken back outside. If he pees or poops outside, reward him by spending about 15 minutes playing with him once inside. If he didn’t, then return him to his crate and take him back out in about an hour.

If he does his job outdoors this time, reward him with play time long enough that he gets tired, usually about 20 to 30 minutes. Then give him a drink and return him to his crate.

About noon, take him potty outside, return to give him a snack and a good drink, and take him back outside. If he’s peed or pooped outside, it’s play time again and then returned to his crate. If not, skip play time and he goes back in his crate. This isn’t punishment, but rather the best way to monitor him and keep him on a schedule. It also keeps him from having an accident somewhere in your home and leaving a scent for him to do it again.

Repeat the same things the remainder of the day until bedtime, giving water every few hours and making sure to take him outside often to avoid any accidents. 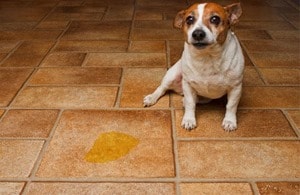 Some dogs, particularly those who have already established a bad habit of going in the house, want to assert their dominance and will refuse to go outside, no matter how long you wait. They’ll hold it as long as necessary. Then, the moment they’re back in the house, they’ll find a spot and leave you a surprise. That’s why you can’t turn your back on him for a single moment unless he’s in his crate. As he learns the routine, he’ll begin to anticipate going outside every time he leaves his crate. As he does, he’ll also begin letting you know he wants to go out through his excited whimpering. If there’s a setback, don’t be discouraged. Just take a step back and begin again.

If you expect to make progress house training a dog, you must be diligent and persistent so he can learn as quickly as possible. No matter how stubborn your dog may seem, sooner or later his bladder will win out over his bullheadedness and he’ll submit to going potty outside. Once he does, you’re both on the road to a terrific friendship with you being the pack leader. Just make sure you can trust him completely before you allow him to roam the house for any length of time.