Spock is at it again. Paws flailing, dirt flying and all your hard work planting a garden is in danger of being completely undone. You’re wondering if you should have named him Digger instead, and are frustrated to think that you might have to hide your lovely garden behind a fence just to protect it from being dug up. Before you spend thousands on fencing, try the behavioral training route. It won’t be easy since digging comes naturally to dogs. After all, for many thousands of years their ancestors dug dens for themselves to sleep and give birth in, and also found small animals there to eat (and play with) such as mice, gophers and moles.

The first step is figuring out if there is a special reason for Spock’s digging. While occasional digging is an instinctive behavior, habitual digging can be a sign that he is bored – very, very bored. The solution to this is simple: exercise. Play with him, take him for walks, or take him along with you on errands. Dogs need mental and physical stimulation just as humans do, and without it they have only a few ways in which to channel their extra energy – and most of those ways are destructive. It’s not as though they can settle in with a deck of cards and play solitaire. You need to help Spock burn off some of that energy. 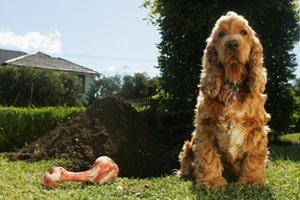 If Spock is getting plenty of exercise but still digging, look for another reason. Is he fenced in and left alone for too long? Is his pen too small? Or are there always tantalizing sights, sounds and – most of all – smells just out of his reach? If so he is very likely to try to tunnel out. (Some dogs have been bred to be diggers; Terriers and scent hounds such as Beagles, Coonhounds and Basset Hounds especially enjoy digging.) Try to take care of both parts of the problem. If his pen is located such that he can hear and smell activity but not see it, reposition it or add a “window” where he can see what’s going on.

If his pen is too small, consider enlarging it, but even if you do, you should still take him to fields or parks or you own big open back yard and let him run on a regular basis. He needs to stretch those legs. Again, play with him, and let him enjoy your company. Dogs are pack animals and naturally social; a dog who spends too much time alone will become bored and destructive. Then fix the fence by extending it down into the ground and it with concrete. Close up any holes you find.

Take a look at the areas where Spock digs. If he digs in several places close together in line, he’s probably got scent of some sort of tunneling creature in its burrow. This is also true if he digs at tree and plant roots. With their super sense of smell, dogs are often on the scent trail of some subterranean beast. Hunting is another instinct in canines.

It could be that Spock is hot, and is just looking for a cool place to lie down. In hot weather, many dogs will scrape away the dirt heated by the sun and flop down in the cooler, loose stuff they’ve unearthed. Does Spock have someplace he can go in the heat to cool down? If not, you need to create one: get a doghouse, open up a space under your deck, or find some other way to leave an area shaded at all times. Leave some water there for him, too.

What if Spock gets lots of exercise, doesn’t seem bored, and isn’t hot, but he’s still digging? There are several things you can try. First, set up a water sprinkler in the area where he digs, then position yourself near the spigot. When Spock starts his excavation project, turn on the sprinkler. After a few times he will understand that digging causes the sprinkler to go off. And since Spock will think it’s the sprinkler that’s reprimanding him, not his favorite person in the entire world, he should stop digging whether you are around or not.

If Spock digs in the same one or two spots, try putting some of his own feces in the hole. Dogs do not like the smell of their own waste (who does?) and will not be inclined to dig through it unless there is a very grand prize below.

Speaking of grand prizes, if all else fails, you may have to set aside a spot where Spock is allowed to dig (but don’t allow it anywhere else). Choose an area and make sure its boundaries are clearly delineated. Bury a toy there, and when Spock finds it, praise him. If he digs anywhere else, obviously, you should not praise him. Continue this until he catches on that he has his own personal sandbox, but that he cannot dig anywhere else. That should keep your garden beautiful for all to see.