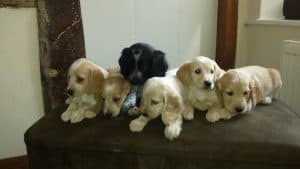 The Bocker is a cross breed between the Cocker Spaniel and the Beagle. It’s considered to be 50% of one pure breed, and 50% of the other, so it’s a hybrid at the first generation.

These dogs are very friendly and are known to get along with other pets, be it dogs or even cats. This breed is also among the intelligent breeds of dogs. Their learning acumen is facilitating very much the training process, along with their docile natures and very rarely being aggressive. However, they may manifest some aggression when they feel they need to protect their owner, which makes them good guard dogs. They are not the excessive barker type.

In order to be able to care properly for a Bocker, one needs to know a few things. These dogs are prone to obesity, so feeding is an important aspect. Ideally, the food needs to be served in smaller portions, but also needs to be of high quality. This way the dog still receives all the vitamins and nutrients, without eating large quantities of food.

These are products that you could need for your new Bocker, or for other medium to large dogs in general. These are all high quality and recommended by those that bought them in the past.

Bockers are very appreciated by people and it’s very easy for anyone to love this dog. Although their appearance is the first thing that catches the eye, it is their personality and sweet nature that wins the appreciation of people. If for some reason this dog doesn’t like a specific person, this will be obvious.

On the overall, most of the physical traits are inherited from the Beagle, including the size which is around 38 centimeters in height and the weight – around 9 kilos. Their legs are about the same length like the Beagle’s, although they lack the thick pads and the ribs are well sprung. Although slim, their build is quite muscular.

The color of a Bocker’s coat can vary and depends on the characteristics of the parents. Most often, a Bocker will have a tri-colored coat, bearing spots. Alternatively, their coats will be chocolate brown bearing white spots. In this case, the brown is inherited from the Cocker Spaniel and the white comes from the Beagle. The coat is short, which is a Beagle heritage and soft – coming from the Cocker parent’s side, not harsh like most other hounds.

Origins for the Bocker mixed breed

The history of the Bocker breed is not a very well known one, or well documented for that matter. As with a lot of other mixed breeds, it’s just sometimes that happened over the last couple of decades intentionally, and since forever by accident. When it’s not done on purpose, you often get multiple breeds mixed in as well, and the results are even more unpredictable. These days though, you could probably find a breeder offering mixed Cocker Spaniel and Beagle dogs, thanks to the pros that thse dogs have.

If we look at the two main breeds which contribute to this particular mix, then we do have a bit of history for them.

One of the older known breeds, which goes back to Greece, during the 5th century (over 1500 years ago), where it was used for hunting. It reached England in the 11th century, and America during late 19th century.

This breed has its origins traced back to Spain, during the 14th century, so it’s another dog that has been around for a long time. This was also a hunting dog initially, though due to its cute looks it was turned into a family pet in time.

From a temperament point of view, the biggest part is inherited from the Cocker. Unfortunately, there are also chances for them to inherit the so-called ‘Spaniel Rage’ from the Cocker, which is a condition they can develop after about 3 years of life and, most often, turns out to be fatal for them.

Unlike Beagles, the Bockers usually prefer adults to interact with and are not recommended for families with smaller children.

These are typically dogs best suited for singles and couples, and they can be great for seniors as well. They’re great for building up a routine, as they prefer predictability and love when they’re doing their daily walking.

These dogs can be great as alert dogs, meaning that they will let you know when there are strangers in the house, when someone knocks or when he hears strange noises. It’s not a big dog, so it’s great just to let you know that something is off, not to actually guard you.

A Bocker is a lovely companion and will enjoy cuddling and lying right next to their masters, while also very protective towards them. They proved to be empathic to some degree and it was often observed that they come and cuddle and hug their masters when they are upset by something. Although they enjoy lying next to the family members, they will still prefer to sleep in their crate during the night.

Intelligence is an advantage when it comes to training, but the down side is that the Bockers are not very eager to please their masters, so at this point training can get a little bit tricky. Using food rewards may aid in the process, but be careful so that they don’t snap at your hand. 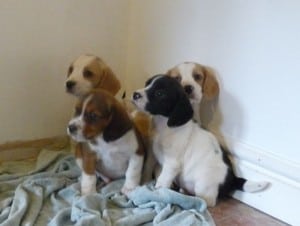 Bockers like to sleep and they usually are very happy to have a routine of their own. If they get used to be fed at a certain hour, they will be alert all the time at that particular hour, even if daylight saving time comes into play in the meantime, so they will not be aware of the time change. Although they do bark, this is not happening as often as with a Beagle. They will very rarely be caught near the fence barking at the neighbor’s dog or at people passing by.

Small puppies should be socialized, so they should meet other dogs of all sizes, as well as children. This should be done while they’re still very young, so that they can get used to them. They need to learn that these much bigger creatures than they are will not harm them.

Just make sure that the small children that get to play with the Bocker don’t do them any harm by mistake, supervision is a must in this case.

Bockers are not the shedding type; in fact, they shed extremely little. Mainly because of this, the grooming requirements for this breed are not very difficult or complex. Occasional coat brushing is good, but pay attention to any signs that they dislike this activity, as this is likely to occur. Bathing is not necessary more than two times per year.

The coat provides the Bockers with some weather proof characteristics similar to both Beagle and Cocker, making them not be particularly disturbed by heat and even to make them enjoy walking in the rain or snow. These dogs do better in colder climate, than they do in hot one.

From a physical activities point of view, the requirements are similar to the Beagle. They need a few daily sessions of running outside and will always enjoy long daily walks. Bockers are very fast dogs so they will perform excellently in fly-ball games, as long as you can draw their interest on the ball itself. If they want, they can be ideal players in such games.

This type of dog is not going to be great indoors, so if you’re living in an apartment it might not get the kind of exercise it needs. If you do have one in an apartment, then make sure he’s taken out regularly, and that he gets his daily dose of exercise and fun. In this situation, the Boker needs about 1-2 hours of walking daily, to make full use of all the energy they have bottled up.

A fact that has been observed and reported by some owners is that some Bockers will pee when taken to the veterinarians, which is a Cocker characteristic.

From a health point of view, Bockers are prone to certain eye allergies.

With regards to the skin, there are no specific issues, dry skin or coat not being noted for this breed.

Also, they are much more resilient to ear infections than many other hounds, no matter the cause: fungus, yeast or bacteria.

Bockers also have a pretty good bone structure, being a healthy breed in general.

As a dog that needs plenty of exercise, if it doesn’t get it, it’s likely that it will become obese, particularly if his feeding is not controlled. It’s generally recommended to be fed 1.5 to 2 cups of food each day (dry dog food, in this case). Keep the treats to a minimum, or cut down from their portions, if you do intend to give them extras.

What is a Bocker Dog?

A Bocker is a mixed breed dog, being 50% Beagle and 50% Cocker Spaniel.

Bocker dogs are loyal, they protect their family, but since the Cocker Spaniel is part of the mix, they’re not always guaranteed to behave well around children. They’re not recommended for families with small children.

How much are Bocker Puppies?

As a mixed breed dog, which isn’t as widespred as some of the other designer mixes, the Bocker can sometimes be found for cheap as a rescue. The price appears to vary somewhere around $500, perhaps more if you get it from a breeder.

What are the costs of owning a Bocker dog?

As with most dog breeds, it comes with certain expenses, and medical bills alone will likely amount to about $500 (vaccines, deworming, neutering and others) to start with. Feeding the dog is also an ongoing expense, adding another $50-70 per month to the total.