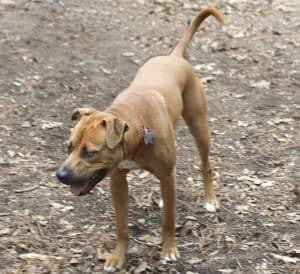 The opposite of the purebred dogs are the crossbreds. One of these is the Catahoula bulldog, which combines an American Bulldog with the Catahoula Cur. The Animal Research Foundation stated that this crossbred is recognized as the result of a 50%-50% mix between Catahoula Leopard and American Bulldog in the first generation cross stage, but in order to preserve the characteristics, a maximum 75%-25% mix should be maintained at all time.This type of bulldog – the Catahoula is considered a dog with medium to large sizes, weighing up to 45 kilos and measuring up to 66 centimeters tall at shoulder level.

The build of the Catahoula Bulldog is inherited from the American bulldog – it is muscular, sturdy skin and a smooth, but very short coat. It is not usual for them to develop an undercoat, unless they live in colder areas. When it comes to colors, the Catahoulas come in quite a variety, with black, white, brown or combination of these. Almost any of these colors can be dominant for their coat and only have spots or patches of the other colors in the range.

Furthermore, even their eyes come in a variety of colors, from different shades of brown, to emerald green, amber, gold or ice blue. Sometimes these dogs present heterochromia. Their ears are sometimes cropped and can be either button over or a rose type. The ears help the Catahoula to increase expressiveness.

Although there are specific reasons for breeding Catahoula Bulldogs, such as work, hunting or guarding, they make excellent companions as well. They are driven by loyalty and devotion towards their human families, also acting in a protective manner towards them. Despite their rather calm behavior, make no mistake as they are always alert and connected to what’s happening in the surroundings.

The herding instincts have been very well passed on to the Catahoula Bulldogs from the Catahoula Leopards, which uses intimidation as the main weapon for carrying out this type of activities. They excel in hog hunting and they are strong opponents for bears as well, as they combine the intelligence, agility and instinct of the Catahoula Leopard with the aggressiveness and sturdiness of the American bulldog. 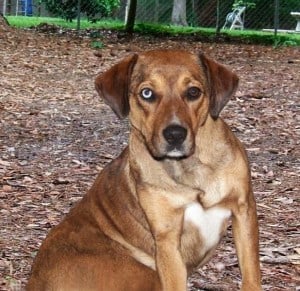 The roots of the Catahoula Bulldogs date with more than one century ago and are located somewhere in the southern areas of the United States. It was the needs of the ranchers to herd and hunt (including the American Black Bear) that triggered the birth of this bulldog. They did very well against hogs, which they lured in pens, while they were able to escape over the backs of the pens. Due to the exquisite combination between power, strength, agility and intelligence, along the strong hunting and herding instincts, the Catahoula Bulldog was very popular even from the beginning. The cross between the two parent breeds enhanced their initial skills and passed them on to the Catahoula Bulldogs.

The first efforts to register this breed of dogs were made in 1951, when people at the Animal Research Foundation began documenting this registration. Almost a decade later, people came to admit that the Catahoula Bulldogs were an excellent solution as protectors and good companions for children, but also dependable in farming activities. While more and more breeders started to breed the Catahoula Bulldogs, it was in 1968 that they became a registered breed and a ARF certified breeder was also recognized.

There are several breeds similar to Catahoula Bulldogs, which are niche breeds which are constantly in development, including the Dorset Olde Tyme Bulldogge, the Olde English Bulldogge, the Mallorquin Bulldog, the Boston Bulldogge and the Buldogue Campiero.

Do NOT follow this link or you will be banned from the site!