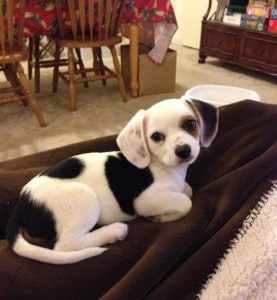 The Cheagle is the hybrid obtained by mixing two of the most popular dog breeds in the United States and worldwide: the Beagle and the Chihuahua. This hybrid dog resembles with a Chihuahua when it comes to the body, but has the markings and floppy ears, similar to the Beagle. The Cheagle reunites the small size of the Chihuahua and the loving and playful nature of the Beagle.

The Cheagles are also considered a designer breed and have been born as a breed quite recently, so there is really not much history from their side. There is no general rule that a designer breed is the direct product of two pure breeds, sometimes one or even both parents can be also a hybrid and the same may happen in the case of Cheagles. To better understand the personality and other characteristics of Cheagles, both parent breeds need to be researched a bit.

The history of Beagles can be traced back in the nineteenth century, although the roots of dogs similar to Beagles reside in around year 400 BC, in the time of the Romans, who are said to have used these similar dogs in rabbit hunting parties. Later on, in the eleventh century, William the Conqueror brought the Talbot hounds, the forefathers of the Beagles and it so that around the early fourteenth century the first Beagles appeared. These small sized dogs were called Glove 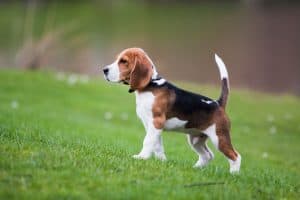 Beagles and they were later on present at the Queen of England’s court, used also for hunting purposes, but due to the fact their speed was not as required they were used for a long period of time. In the early eighteenth century, the Beagles lost in popularity again, because the foxhounds began being used in the more and more popular fox hunting. But they were still used by farmers, who thus allowed this breed to go on.

It is only around the beginning of the nineteenth century that the Beagles started to look as the ones in present day. One century later, they reached American soil and quickly grew in popularity, mainly due to their speed. Today, these are dogs that are very appreciated for their adorable and gentle natures, but are also known to be very stubborn at times. Because they want to prove they are smarter than people around them, a good food reward may turn out to be the only way they can be persuaded to be trained.

Regarding the origins of the Chihuahuas, there are two different assumptions. One of them states that they are the line descendants of the Techichi, an ancient dog localized in the ninth century in South and Central America. According to the other theory, the Chihuahua came from China, brought by Spanish traders to Mexico, where they then mixed with other native dog breeds. The 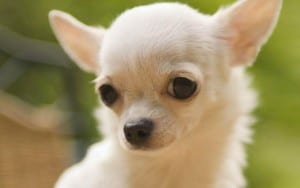 short haired version of the Chihuahua breeds was found in a state in Mexico, having the same name as the breed, so it is after this state’s name that the breed was called Chihuahua. They reached American towards the end of the nineteenth century and they were first officially recorded by the AKC in 1904. At some point later, a longer haired version of the Chihuahua appeared and it is believed that it was the result of the mix between them and other breeds such as Papillons or Pomeranians.

The Chihuahuas are considered today alert dogs – reminding of terriers, very brave and with a strong self confidence. However, they are also sensitive and require a lot of affection. They have rather good watchdogs and are reserved with peoples they don’t know. Although they get along very well with the entire family, they tend to bond stronger with only one family member.

Cheagles are active dogs, who love to play and have loads of fun. They are friendly and outgoing and, at the same time, they are very devoted and protective of their families. They love to be active, but also enjoy relaxing in the masters’ laps. While playing, Cheagles can get a bit overexcited and can sometimes become slightly aggressive and even nip. 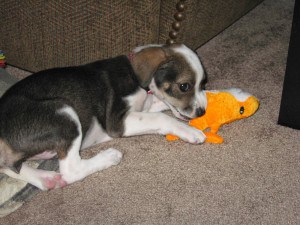 Cheagles are small sized dogs, being usually no more than 35 centimeters tall and no heavier than 10 kilos. Their bodies resemble to the bodies of Chihuahuas, while the ears and some markings sometime point to the Beagles. Their coats are shiny and short, with a range of colors that includes black, brown, white, cream or tan and even if most often it is a combination of any of these, there are cases in which they are single colored. They have dark brown eyes and long tails.

Given their small size, the Cheagles are quite active, always enjoying running in the backyard or in dog parks. Playing is also among their preferences and along other physical activities it will provide the necessary energy burn so these dogs will be well balanced and tempered, preventing any unwanted, destructive behavior. A leash will probably be required when walking these dogs out in the open, as they inherited the Beagles’ instincts to catch and follow scents.

Due to the fact that they are a bit overactive, the training process can be somewhat difficult than for other dogs. However, with consistency and a gentle, but firm hand, there are no reasons why training cannot be successful. On the overall, training takes about the same time as with other breeds, but is important for it to start when the dog is very young. Early socialization is equally important for Cheagles as well, ensuring that they give their best and become the best dogs they can be.

It’s easy to brush the Cheagles’ short coats, but they are still shedders from a low to a moderate degree. The frequency of brushing will need to be in line with how much these dogs shed, but generally a few times per week should do the trick. Bathing is also required on a need basis, but is important to use special dog shampoo and not products for people, as they can have negative effects on their skin.Be sure to check and clean their ears on a weekly basis. Nail clipping is also needed, but it may require being performed by professionals, as incorrect clipping may lead to 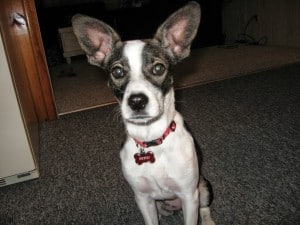 Cheagles can do well with other pets and children, provided they are properly trained and socialized, but it can very well be the opposite case, especially if they inherit more from the Chihuahua’s temperament. They could even be aggressive towards other dogs. Their interactions with small children should always be supervised.

Cheagles usually bark at strangers and will alert the owners of things out of the ordinary, so they have good watchdog abilities. Ideally, they need to be fed with good quality food, mainly dry food, but not all at once, but two meals per day. They are low to moderate barkers and their bark can resemble both Chihuahua’s or Beagle’s barking pattern. They will not tolerate well extreme temperatures, be it hot or cold. Snoring can occur due to the size of their muzzles.

Because of their rather short history, their health conditions are not too well known, but so far it seems they have a good overall health. Like any other hybrid, Cheagles can inherit some of the health issues from the parent breeds and in their case it can be hip dysplasia, Patellar luxation, heart problesm, low blood sugar levels or eye issues.

Owning Cheagles is generally not very expensive. The cost of getting a puppy can vary from 300 USD to about 700, depending on aspects such as their health, age or the reputation of the breeder. The initial health checks will also cost a few hundred dollars, as well as the implantation of a micro chip to help in case the puppy manages to get lost. Other accessories such as collars, leashes and toys, as well as the necessary food, treats and periodic, recurring medical costs will take the costs up to one thousand dollars per year. However, these adorable dogs will definitely worth it all. Their strong personalities and playful natures make them good companions for people and even if they me stubborn at times, a consistent and early training will ensure they develop well and avoid unwanted behavior later on, as adults.