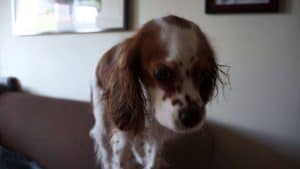 The mix between the Cocker Spaniel and the Cavalier King Charles dog breeds comes by the name of Cockalier and it is considered a designer breed or a hybrid. The colors of these dogs can vary quite a lot, as well as the markings on their coats. Probably the most popular marking is called Blenheim and it comes as golden red spots on a white background. But color is determined by how genetic information is passed on from the parents.

More often, the physical traits and body build for a Cockalier will be more similar to only one of the parents, rather than to be a combination of both. The tendency with Cockaliers is to inherit the Cocker Spaniel parent’s body builds, which is rather stubby, but there are plenty that inherit the Cavalier’s build. In general, the Cockaliers weight up to 15 kilos as adults.

The genes play their important role when it comes to coat, as well. Depending which parent has the dominant genes, the coat of a Cockalier can vary in aspect, either pointing out to the Cavalier or to the Spaniel. The maintenance will also vary depending on the type of the coat the Cockalier inherits from the parents’ lines.

A few and maybe the most important characteristics of the Cockaliers are the fact that they are easy going and they have a gentle, sweet disposition almost all the time. Training is also pretty easy to be carried out for them, thus making them get along quite well with children and other pets and, in the end, to prove themselves as great family dogs. Training is facilitated by their intelligence, which allows them to easily assimilate information and learn tricks. 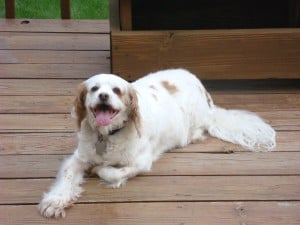 Moreover, they love to please their owners.All these are traits that make the Cockaliers very wanted by families, especially that they don’t typically manifest aggression of any kind and can be described as loyal dogs. They love to play and get along well with children, but given they are one of the smaller breeds, it is important that their interaction with the children is supervised, as the latter can injure them by mistake, during energetic play sessions.

From a health point of view, probably the highest risks are the ear infections, which are inherited from the Spaniel parent’s line. However, one could prevent these from occurring by carrying out regular ear inspections and ensuring a good hygiene of the ears. It is very important to address these issues as early as possible, in order not to allow them to get worse.

As described above, it depends on which parent’s traits the Cockalier inherits when it comes to the coat. A curly coat, similar to the Cocker Spaniel’s will require a little less attention rather than one that is similar to the Cavalier’s, which is finer and can even increase the risk of ear problems due to the chances of becoming snarled. 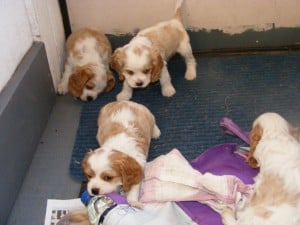 But it’s important to note that no matter which parent’s traits they inherit the most, the ears require special attention when it comes to hygiene. They are moderate shedders, especially those that inherit more the line of the Cavalier parent. Due to their smaller size, their bladder is also smaller, therefore they need to enjoy more daily sessions of waling outdoors in order to prevent unwanted events inside the home. On the overall, Cockaliers are quite easy to housetrain.

Training a Cockalier is a rather simple and easy process, due to the characteristics of these dogs. Their intelligence and desire to please their owners ensure that the information they receive during training is easily assimilated. However, it is important to bear in mind that the sessions should be short so that the dog doesn’t get distracted or bored. They are very responsive to training and obedience schools aren’t typically required. They are also motivated by positive reinforcements and praise, so don’t hesitate to use plenty of these.

Due to their highly active and playful nature, the Cockaliers enjoy homes which provide them with plenty of open space where they can run and play. They can adapt well to apartment living as well, but the previous statement stands and the owners should make the necessary efforts in order for their dogs to be able to fulfill their needs. They do have a tendency to hunt small game, so it is important to keep this in mind during walking and playing sessions in the outdoors. Rabbits and squirrels will definitely attract the Cockaliers’ attention. Managing these situations can be addressed during training, given these dogs’ highly responsiveness to commands.

Before getting a Cockalier, it is important to note the most important aspects of this hybrid dog. Firstly, they are moderate shedders, no matter which parent’s coat they inherit more, so the grooming requirements will also be at a moderate level, but performed regularly in order to maintain a goo-looking and healthy coat. The training process is pretty easy to carry out, given their intelligence and desire to please, but patience is required and the sessions need to be shorter.

Cockaliers are not good watchdogs as they don’t usually announce the presence of intruders, but they are getting along well with children and other pets, especially if they receive a good training. As they are the active type of dogs, they require regular exercising in order to burn the excess energy. Outdoors walking, running and playing sessions are ideal for these dogs.