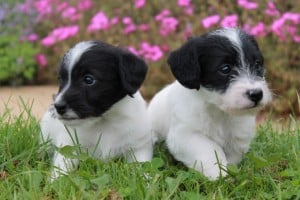 These dogs became more and more popular in the United States over the last years. However, there is still a lot of information not yet researched or available for this hybrid and many of the physical and temperament characteristics are only known once the dog is born and grows. The appearance can vary and can resemble either to the Poodle parent or to the Jack Russell one.

Provided the Jackapoos get proper training and enough physical exercises, along with their good instincts, they can turn out to be quite good dogs for families. It is through these means that the dog can get used to children and other pets and behave nicely, becoming very good friends even. Jackapoos are loving dogs, loyal and funny altogether.

They are not difficult to groom, but their coat will require trimming and clipping in a manner similar to the Poodle parent. Fortunately, the Jackapoos inherited good health condition and have fewer issues than other dogs. The studies on their health are, however, not finalized, but on-going, but this means that the current awareness of all health aspects is only limited.

Jackapoos are known to be the quick learner types. An experienced trainer will know how to employ authority and command sets over these dogs to achieve the desired results. The training is relatively easy to carry out and it can get to such an advanced level where the dog understands commands almost like a human, making it easy for the dogs to execute them. Jackapoos are always keen on learning new tricks which is another advantage for a smooth training process. If the trainer finds the right levels in being firm and consistent during sessions, it will help the dog quickly understand the rules and limitations they need to abide to.

When it comes to instincts, the Jackapoos are very close to their Jack Russell parents. They need a proper level of daily exercises, be it long walks or playtime. Early age training and socialization will ensure the Jackapoos fit well in group with children and other pets. They can adapt pretty well to both indoor and outdoor living environments. They sometimes like to lay inactive indoors, but other times they will take full advantage of an outdoor fenced backyard. Their physical build requires daily exercises.

The average life expectancy of the Jackapoos is between twelve and fifteen years, but they may very well outlive this age interval. In this respect, their health condition and environment and the care they receive are key elements that can influence their life span.

Jackapoos are considered a small to medium dog breed. They have flat heads which widen a bit at the ears area. Their ears are medium in length and they tend to be oriented towards the front. Their coats are smooth, but tough and they can come in a variety of colors such as white, black, tan or any combinations of these. Sometimes they have color spots, which more often are black. 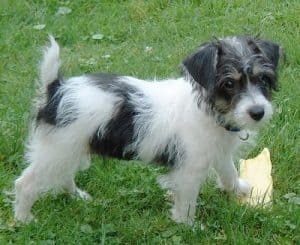 The height of an adult Jackapoo male dog is usually between 25 and 40 centimeters, while the weight ranges between 6 and 12 kilos. The females are usually slightly lighter and shorter. On the overall, the size of Jackapoos is determined by the health level and the quality of the food in their diet.

There are several good qualities of the Jackapoos that may recommend them to potential owners. They are smart and also beautiful dogs, traits inherited from their parents: the strength comes from the Jack Russell terriers and the intelligence from the Poodle. Despite their smaller size, they are very strong dogs. They intelligence allows them to be easy to train, being able to interpret and understand commands almost like a human would.

When it comes to temperament, it is harder to estimate accurately how it would be in a Jackapoo. This is because of genetics and depends on how the parents’ characteristics have been passed on to their puppies. It is also similar with regards to their appearance. Sometimes they may resemble very much like the Jack Russell terriers, while other times they can look similar to the Poodles.

Jackapoos like sometimes to be lazy and relax on the couch or in their masters’ laps. But they are also active and fully enjoy long walks, on which they would appreciate to be taken on a daily basis. The characteristics the Jackapoos inherit from their parent turn them into both intelligent and amusing dogs. They do well with children if properly trained and socialized, even when teased or irritated by them.

Once a set of rules, meaning do’s and don’ts is put together and passed on to the Jackapoos, they will know how to behave and will follow the leader which can be either the trainer or their owner. If they don’t receive the necessary training and attention, they can develop unwanted behaviors which will become problematic for their owners. Chewing things around the house is one of such potential unwanted manifestations. The possibility of such behaviors is easy to spot when the dogs are between six and ten months of age.

The Jackapoos have the power to adapt even to living in apartments, provided they are still given the chance to exercise on a daily basis, such as walking and running. They are adaptable to different life styles and different environments, enjoying both living in a city or in the country side. They enjoy the indoors as well as the outdoors, as long as there is an equilibrium between the two. They love fenced backyards, which gives them plenty of space to run and play.

Other Pets and Children

With proper training and socialization, the Jackapoos can get along very well with children and other pets, similar to their Poodle parents. The Jack Russell Terrier heritage allows the Jackapoos to also get along well with children. But in order for them to be such good companions for pets and children, the socialization plays a key role, even if they have all the good instincts of a family dog. All in all, the Jackapoo proved in time that they are suitable to be part of families and, more than just suitable, they become real members and are a delight for the rest of the people due to their intelligence and amusing presence. They are friendly and are capable of communicating and adjusting well to all the members of the family.

This hybrid dog is a pretty low shedder, which means that the required grooming level is not very demanding. The coat of the Jackapoos will be sometimes similar to the Poodle parent’s and it will require clipping, just like the coat of the Poodles does. There are a few clipping patterns, such as ‘pet clip’, puppy clip’ or ‘lamb clip’. There is also a need for combing the coat of a Jackapoo, but this needs to be carried out with the proper tools, such as brushed made of a good type of plastic. Checking their ears periodically is welcome and recommended, just like a good bath from time to time or when they got dirty.

Fortunately, the Jackapoos are less exposed to health issues than the parent pure breeds and the statistics confirm this. However, the awareness on the health conditions of these hybrids is still low, as studies about these aspects are still carried out.

An experienced trainer will know how to use the perfect combination between knowledge, authority, firmness, gentility and consistency in order to make the best of these dogs in training. Jackapoos are intelligent and are able to understand very well what the trainers want to communicate to them. Sometimes their understanding level is so high that it is almost like the trainer communicates with another human. Jackapoos need to be aware of the dos and don’ts, which should be passed on to them in a firm and consistent manner. If this is done properly, the dogs will even like to abide to these rules.

With such refined parents and such vigorous builds, the Jackapoos need to stay in shape and require a proper level of daily physical exercises. Long walks and runs are among these dogs’ favorite activities. They can adjust to indoor living as well as to outdoor living, but they need to compensate the indoor laziness at times with enough exercising in the outdoors. They will love to play and be active in a fenced backyard of a house. With all the right socialization and training provided, they will be good companions and playing partners for children and other pets.