If you have a dog that likes to fight other dogs, it can be a frightening and annoying experience just going for a simple mid-afternoon walk in the park. It’s important to know that you can train a dog to overcome his fighting instincts, and that your own personality needs to be strong to deal with fighters. You have to show him that you are the boss.

Usually fighter dogs are adult male dogs; very few puppies have a fighting instinct (they’d rather play) and few female dogs fight. What is it that makes a dog fight or attack every dog it meets? Does it think that dog is a true enemy? Most likely not; a dog’s mind tells it to make a show of strength, so thus the attack begins. But have you noticed that very often these macho dogs are actually bullying other people’s toy dogs that are much smaller than itself? 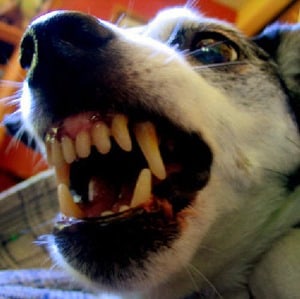 But put that same fighter dog against a bigger, stronger dog, most likely he will disappear quickly. That’s because the bully realizes he is not the boss, he senses that he is not superior thus will automatically become subservient, often times lying on his back with his four paws up in the air.

You’ll often notice that young dogs lie on their backs, all four feet in the air, when they meet an older dog, or one that they know is stronger. They are exposing their underside to the enemy, telling the other dog that they are the boss. If you have a young dog who does this regularly, as a dog owner you should try to dissuade your dog from becoming the weak dog. It’s not a funny trick; it shows your dog is willing to give in easily.

The key to training and gaining respect of any dog is to show them that you are in control, the boss. When a dog no longer sees you as the alpha, he will no longer listen to your commands.

Muzzling is not a cure for a fighter dog, but it can be a plausible option for controlling your pet. Neutering your dog can be another option. Owners who do not choose to have their dog neutered should be responsible to have their dogs muzzled at all times in public places. The mind of a fighter dog is always looking to be the boss of the tribe, and he fights other male dogs who are sexually mature to make sure there is no risk of his being questioned dethroned. If you muzzle that dog and let him loose with the dog he has previously fought, nine times out of ten he will realize he is at a disadvantage and show no signs of aggression.

That tells us the solution for fighting dogs: they should be muzzled and then freed with trained dogs or non-fighters. They’ll learn to enjoy themselves in a community and soon the wish to fight will go away.