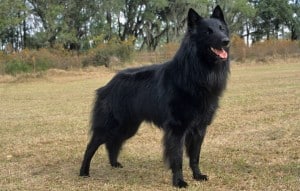 The Belgian Sheepdog is also called the Groenendael or the Chien de Berger Belge. It gained the name Groenendael from the city where it was developed. The first breeder of the Belgian sheepdog was Nicholas Rose. He mated two dogs called Picard and Petite to start his foundation litter. These dogs were developed to be herders.

This breed has also been used as guide dogs, rescue dogs, and therapy dogs. During World War I, these canines were messengers, they hauled machine guns, and were ambulance dogs. The Belgian Sheepdog Club of America was established in 1919. The AKC made a decision on 07/01/59 that stated that the Groenendael is allowed to be registered as the Belgian Sheepdog. The dog has to have a third generation ancestry. The Belgian Malinois and the Belgian Tervuren are considered different breeds by the AKC.

The muzzle is long. The eyes are round and dark. The ears stand up, are placed high on the head, and are rectangular shaped. The neck is muscular and of moderate length. The shoulders are angular. The chest is narrow and medium deep. The tail is long.

The Belgian Sheepdog sheds all year long. It needs a lot of brushing to keep mats and tangles out of the fur. This breed needs a thorough brushing each week and a brushing each day, less intense brushing daily helps lessen the length of the thorough brushing. These dogs really like a lot of work to perform. They need regular exercise. They get on with gentle kids. They are protective.

Coat of a Belgian Sheepdog 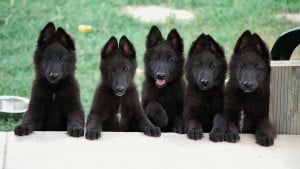 The coat is doubled. The outer coat is long, straight, and thick. Its texture is harsh, but not extremely so. The undercoat is soft. The undercoat will be thicker or less thick according to where the dog lives.

The color is black. Small areas of white on the chest, toe’s tips, and between the paw pads is okay. A show dog can’t have white on its front paws. The muzzle of some will look salt and pepper.

The movement looks free, smooth, and easy. It doesn’t depend on hard rear drive, but fluency of movement. When performing a quick gait, the Belgian Sheepdog single tracks. 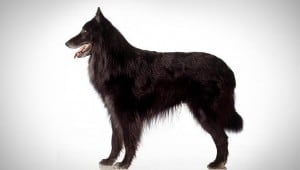 This breed is smart, independent, gentle, active, alert, obedient, and protective. It has the combination of traits that enable it to work independently, when left alone and to work directly with its master.

It is a sensitive canine that reacts to any disapproving sound its owner makes. Thus, it needs good socialization early on so it won’t develop shyness or aggressiveness. Socialization from a pup produces a well adjusted dog that is a great family pet, guard dog, and companion.

This breed should be around children early on to get used to the noise and and movement of small kids. Be careful when introducing new people because this breed is very protective. It may chase cats, but gets on well with those known from puppy-hood. It is better with other dog breeds that aren’t dominant.