A lot of people think that a dog that chews things is either terribly bored or simply trying to be vindictive. They’re wrong. This is one of the most common problems when it comes to dogs and undesirable behavior. But it’s also not as straightforward as many dog owners think. Humans play solitaire to keep themselves occupied when they’re alone. Dogs chew. It’s what they do.

Actually, chewing is much more important to dogs than solitaire is to humans. Dogs need to chew on things to maintain healthy teeth and gums and good jaw strength. Solitaire will do nothing for your dental hygiene. 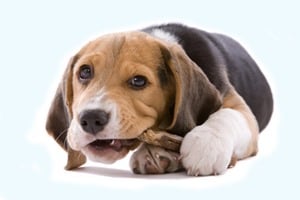 Puppies need to chew even more when they are teething (in fact, there are special chew toys that can be dampened and frozen to provide relief for painful gums during this process).

Dogs need to learn what they can and cannot chew on, and they are quite capable of doing so when properly taught. Here are four steps every dog owner should take to encourage “constructive chewing.”

1. Prevent. As always, the best cure is prevention, but dog owners should also always dog-proof their home, especially with puppies. They can be very creative with what they chew.

Anything not removable that has been or is likely to be targeted can be sprayed with a deterrent, such as Bitter Apple.

2. Interrupt. Whenever you are there with your dog, it is important that you actively teach them commands for “leave it” or “drop.” These are given whenever you see them taking something into their jaws that should not be in there.

You may have to orchestrate this training process by adding some of the items that you removed in step 1. But that’s what training is all about – setting up safe scenarios in which you can help them differentiate between appropriate and inappropriate behavior.

These commands will also work well when you are out with your dog and they want to pick up something dangerous or just foul.

3. Redirect. Here’s where you start teaching your friend which toys belong to them, to chew to pieces if they like (and they will).

Immediately after removing the inappropriate item from their clutches, replace it with an appropriate toy.

It will take some time to really zero in on a few of your dog’s most favorite things. But as you try lots of different toys to encourage constructive chewing, keep in mind that the best ones are those designed to promote healthy teeth and gums such as dental chew ropes.

Also, try to find what are called “active toys,” which give your dog something to do for an extended period of time. For example, “Kong” balls and rubber toys can be stuffed with food, such as peanut butter or whatever they go for. Often dogs are inactive when they are alone because they’re missing you.

4. Praise. The final step is simple but not one to forget. And you already know how best to praise your dog.

Good news. All in all the good news is that most dogs will grow out of this phase somewhat at the same time as they figure out what’s chewable and what’s not.

If your dog’s chewing problem continues, however, it is likely to be an expression of nervous energy (the same goes for excessive licking, of themselves and others). The number one cause of nervous energy for dogs is lack of exercise.

A brisk 15-minute walk is simply not enough for many dogs, barely a warm- up for a Border Collie, and it is important to understand that exercise is different from a play session or outing to the park.

The mistake that a lot of dog owners make, which is an unfortunate function of their busy schedules, is that they pack in two high intensity (15- 20 minute) fetch sessions at the beginning and end of the day.

True, this is much better than nothing, but the fact that the dog goes more or less from sleeping to sprinting, then from lying around all day to sprinting again, can cause extra wear and tear on the joints and possibly early arthritis.

Like humans, a dog benefits from a decent warm-up and warm-down, and busy owners should do their best to sneak in some longer, less intense exercise sessions.

All the best with it, and don’t chew out your dog in the meantime!