Dogs whine to express different conditions or states of mind. We need to understand under what conditions most whining occurs before we can worry about stopping it. Whining is always a form of communication; we just need to be able to understand it. There are some breeds that are more likely to whine. Anyone that has ever lived with a German Shepherd Dog knows they are big fans of whining! Huskies and Basenjis are known to whine and yodel too. Dogs that whine a lot may do it more so than barking, and they can be quite expressive in their efforts.

Especially for dogs that like to whine, whining is a way of expressing emotions. Whining is used to express frustration like when a dog would like to go somewhere or do something and is physically unable. It can be used to express extreme excitement like an agility dog who wants to run a course but it’s not its turn yet. Lastly, one of the largest ways of expressing anxiety is through whining. 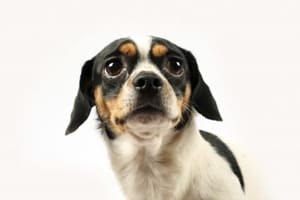 When we have an anxious reaction to a situation that is overwhelming for the dog, whining is usually accompanied by additional symptoms like excessive panting, pacing, drooling, sweating feet, etc.

To stop dog whining, we need to determine why the dog is whining and then develop a plan from there. Below are some suggestions:

1. For frustration and excitement whining: The frustration has to be released! If you know your dog will become easily frustrated or excited in a situation and it is unavoidable, exercise is a good course of action. A well exercised dog has less energy to whine with. Especially when a dog is excited and we want to stop the dog from whining, we can use the source of his excitement as his reward. For example, if your dog whines when you pick up the leash for a walk, we want to be careful to not reward the whining. Pick up his leash as normal, and if he whines, put it back down and sit down for a few minutes. Try again. If he whines, it’s the same process. Do not put on the leash and leave until he can maintain his calm. This may require some patience, but you have to be consistent. For any excitement whining, figure out the source of excitement, and that will be your reward. He cannot have it until he maintains some calm.

2. For anxiety whining: This really depends on the depth of severity of the anxiety. If he is experiencing a good amount of it, then you are over the threshold for what he can reasonably handle. A threshold is the point your dog can maintain control. For example, if small children make your dog anxious, you have to figure out how far away he can be from them and not be anxious. This is his threshold distance. Slowly you will lessen the distance and desensitize him to the children until his anxiety lessens. This may take days, weeks, months, or years depending on what makes him anxious and how severe it is.

For most forms of whining like frustration, excitement, or breed related tendencies, exercise and lack of attention and reward go a long way towards lessening the problem. The main thing to remember is that to stop dog whining you have to be patient and very, very consistent. If you give into his whining just one time, he will remember it and the problem with still occur. When the whining is anxiety related, worry less about how to stop dog whining and more about how to lessen the anxiety. Sometimes this requires professional help and don’t be afraid to ask. These tips should go a long way towards helping you with your whining problem.