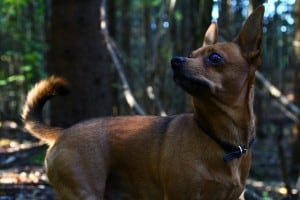 The mixing of two purebreds is usually known as a hybrid breed. This is also the case of the Chipin, a dog whose parent breeds are the Miniature Pinscher and the Chihuahua. The characteristics of such a hybrid dog are usually a direct consequence of the ones of the parent breeds, so studying the latter can provide an overview of the traits of the hybrid, in this case the Chipin, like the size, the coat and the temperament. The colors of a Chipin’s coat can vary from one case to another, but the most often encountered are black, tan and white and any two colors combination between them. There a few extra colors such as light cream, chocolate and deep red adding to the most common ones.

The representative of a small breed of dogs, the Chipin is in fact very playful and energetic and adapts pretty well to living in apartments. Also being an intelligent dog, new tricks are easy to be learnt. Although not aggressive towards strangers, he maintains a careful, hesitating approach and can be excitable at times. The Cipins are protective towards their territory and loyal to their owners.

Highly energetic, the Chpins require a moderate to high level of activity, which starts with at least a daily long walk. If they don’t manage to burn the necessary energy, they tend to be over-active indoors, running and barking. Where other pets are present, they can also be victims to the over-energetic Chipins, which will play a bit too enthusiastically and hurt them. Because of this consistent energy consumption, these dogs have a serious issue sometimes in their attempt to maintain their weight.

Easily adaptable to any indoor living also due to their low requirements with regards to grooming, the Chipins will not enjoy sitting exclusively indoors. They love to get enough outdoors exercises. Friendly, sociable dogs, the Chipins suffer if they are left alone all day, as they love being in the company of people. It’s best to supervise them if smaller children are present in the house, as these dogs are a bit fragile and can be easily hurt. They also get along well with other pets, but some prefer being the only pet in the house. Good outdoor exercising prevents the Chipins to turn to a bad behavior due to their energy levels.

Chihuahua, One of the Parents 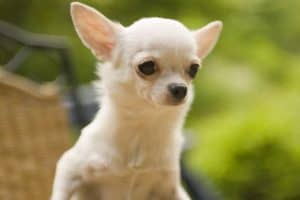 The Chihuahua’s personality significantly exceeds the size of the body, endowed with a strong determination. His barking abilities can render him watch dog ability, but it can also make him annoying if he’s not trained to control it. A very small dog, the Chihuahua is also loyal to the people he considers his own and is very expressive.

Despite what many believe when acknowledging his small size, he is far from being suitable for houses with small children, as its frailty can put him in danger during plays. They are perfect for travelling, as it’s easy to carry them around in puppy purses, but even if small they tend to be aggressive when they feel threatened or when they are trying to protect their people and territory.

Proper training and socialization, started at an early age of the Chihuahua puppy, can prevent the bad behavior and aggressiveness. However, because they consider this dog too small to cause problems, some people just allow the dog to develop a personality at his own choice and this often ends up with dog’s bad manners. Training can also prevent the Chihuahua getting in trouble when engaging in quarrels with other, bigger, dogs, being unaware of their small size. As a consequence, the size doesn’t mean that little or no training is required for this dog, but, sometimes, it can point out that it’s needed more than in the case of bigger dogs.

Chihuahuas are excellent alarms for the presence of strangers that are about to enter the territory, even if sometimes the strangers are only imaginary. The yapping will give away any unusual thing happening. They also tend to be protective towards their owners and won’t be especially happy if other pets would be brought in their house. The coat of a Chihuahua can be both long and short. In the first case the shedding is a bit more consistent than in the second, although the reduced size of the dog makes the shedding a rather small issue. Daily brushing is, however, required for the Chihuahuas with a longer coat.

This dog is often compared to a Doberman, only coming in much smaller sizes. He is indeed a very brave dog, which recommends it perfectly as watch dog. Easy to groom and funny, the Miniature Pinscher is also called the ‘King of Toys’, but his strong determination needs to be carefully manipulated and it’s best that the owner is a bit more experienced so he can control this small dog. 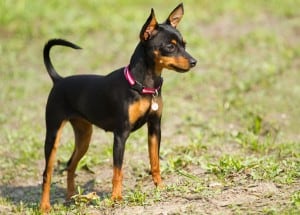 The fearless and spirited Miniature Pinscher is very curious by nature and won’t hold back to have a taste of everything at hand. Medicine and other dangerous stuff should be carefully put away, out of reach. He also has a much bigger personality than his body, believing about himself that he’s a big fellow, rather than a toy breed.

He’s very protective towards his family and territory and will bravely challenge any intruder disregarding their size. This Pinscher is affectionate, but he’ll always walk like a king instead of being carried in a dog purse. This dog is very agile and manages to slip through tiny holes in the fences, so it’s best to regularly check these for potential breaches. He sees everything as a challenge and will do his best to overcome them.

It’s important to dress this dog with special dog sweaters during colder periods, as it has a very low tolerance for cold, in the absence of a dense coat and body fat. Similar to almost all the other toy breeds, the Miniature Pinscher needs to start training very early of age in order to be adapted to indoor living, as later on this becomes difficult due to developing stubbornness.

Grooming this dog is not a complicated activity. A few brushing sessions per week, along with regular teeth and ears cleaning and nail trimming should do the trick. The Miniature Pinscher is designed exclusively for indoor living, as all his characteristics make the outdoors living a threat. Loving his people, he needs to live among them.

9 thoughts on “Chipin, a Chihuahua and Miniature Pinscher Mix”