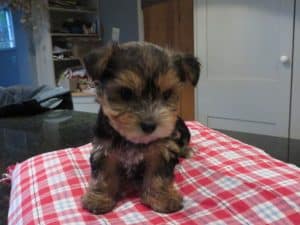 The Dorkie is a small sized cross breed, resulted from the mix of the Yorkshire Terrier and the Dachshund. They are adorable dogs, known for their cheerfulness, intelligence, affectionate behavior, playfulness and gentility. Gray, black, white and golden are a few colors which the Dorkie’s can come in. Physical exercising helps dogs in general to maintain a good health level and keep fit and the Dorkie’s are no exception to this rule, so a proper level of physical activity is recommended for them.

Before deciding to get a Dorkie, it is important to be familiar with their characteristics and needs, in order to establish if this cross breed is indeed a good choice. They are generally low maintenance dogs, as grooming needs to be carried out occasionally, in order to maintain the dog’s good looks. From a training point of view, these dogs are doing just fine – they won’t require too much efforts or long period of times, but this is still a process and results will come one by one.

The Dorkie can be the barker type and use barking to announce the presence or the approach of intruders. Given their size, they won’t require a consistent level of daily activities, doing well even when kept indoors, with their masters away for work and travels. Children are safe with this dog, as Dorkie’s are very fond of them, as well as of other pets, so they will all get along just fine. As a result of the mix between the two parent breeds, the Dorkie can inherit the long bodies, along the floppy ears, short legs and soft, silky coats. 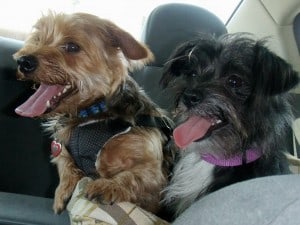 Originally, the Dachshund’s were obtained as a hunting breed used for badgers. Dangerous enough activity, these fearless dogs fit in perfectly, chasing the badgers down into their burrows. On the other hand, Terriers and Yorkies (Yorkshire Terriers) were bred for keeping rats and mice away from homes, farms and mills, but with time their use changed and become perfect as pets, especially because of their small size.

Designer dog breeds are known for being extremely cute and adorable, which is their goal from the start, but this should not mean that the dog’s temperament is not important. When getting a Dorkie puppy, one should check the parents’ characteristics, because even though the typical temperaments of both Dachshund and Terrier are known, these may vary from one dog to another, depending on a lot of factors.

The training and socialization a dog undergoes since the early ages play key roles in the dog’s later development. Both the Dachshund and the Terrier are protective of their owners, very loyal and alerts them when they sense intruders approaching. Although both breeds can be quite the barker types, this can be prevented through early training, as well as the Dachshund parent’s digging skills which could potentially be passed on to the puppies.

Dorkies are excellent family dogs, especially due to their intelligence and devotion towards their people. They generally do very well with children, but it is recommended that the interaction between them and the kids are supervised by adults. With both parent breeds having a life expectancy of up to fifteen years, the same expectancy is passed on to the Dorkie puppies.

However, it can depend from one case to another. With regards to health, there are some conditions of which a potential owner should be aware of. From the Dachshund’s side, some items like bones and back problems, epilepsy and hypothyroid affection can be inherited.

The latter is also present in the Terrier’s side, along with another condition which prevents the blood circulating normally through the liver. These conditions are part of the hereditary bloodline, but can or cannot pass on to the Dorkie’s. Therefore, it is important to pay regular visits to the veterinarians, in order to detect and treat early any conditions that are threatening the puppies’ lives. 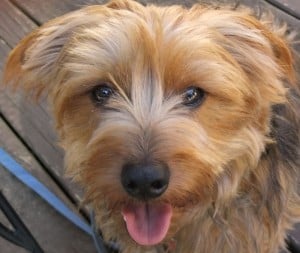 The training should start at early ages and should be carried out with consistency, in order to ensure the best results. It is important as trainer or owner to be recognized as the pack leader by the dog, so that there will be no behavioral issues later on.

Dorkie’s are a bit picky with their food, so this aspect needs to be carefully monitored. Oats are a good addition to the dog’s food, otherwise the dry food would do the trick. A puppy usually needs up to two cups per day, while an adult usually serves about three, but divided in two meals.

The appearance of the Dorkie’s depends very much of how the genetic information from the two parents has been passed on. However, they typically have long bodies, ears either floppy or erect, wagging tail and soft coat, which usually comes in combinations of gold and black, tan or black or simply dapple.