If you’re looking for a new dog, and you’re not quite decided which breed is best for you, then a straight comparison between three of the most popular mixed breeds might help you decide. We’re looking at the Goldendoodle, Labradoodle and Aussiedoodle today, analyzing their personality, adaptability, behavior around children or other pets, grooming, exercise, and more. Keep reading, and you will find out which ones come out ahead in each category.

Looking at the three mixed breeds here, the common thing for all of them is the Poodle’s contribution, and a lot of the things that they bring to the table will come from that side. With that in mind, the other three breeds are the ones that will bring the differences. Ultimately, we end up comparing the Australian Shepherd, with the Labrador Retriever and Golden Retriever.

Extremely intelligent, easy to train, affectionate, they all need plenty of exercise and grooming. I’d choose a Labradoodle or Goldendoodle for a family, especially if there are children or pets around, but those looking for a watchdog and someone to guard the house will do a lot better with the Aussiedoodle.

You can read more about how the three breeds compare in each category, below.

How big do these mixed breed dogs get?

It kind of depends, as there are mixes which can be considered Miniature or Medium. The standard versions of these breeds tend to be between 45 and 100 pounds for the Goldendoodle and Labradoodle, and 25 to 100 for the Aussiedoodle. The first two can be as low as 15 pounds though, if you’re going with a mini version.

The typical lifespan appears to be potentially lower for the Aussiedoodle, between 10 and 12 years typically. The other two will typically live 1o to 15 years.

Dealing with change can be an issue with some dogs, but neither of the three mentioned here should have any issues. All three deal very well with change.

The way a dog is raised will matter quite a bit, but so will the temperament of its parents, so genetics is also to be taken into consideration.

Both the Poodle, and the other three breeds which provide the other half of the mix, are highly intelligent and friendly, and they are quite easy to train.

The Aussiedoodle is the least territorial of the three, while the others are a bit worse there, but not by much.

How good are they around your family and pets?

All three mixed breeds should be highly affectionate, friendly and warm. If you have a family, you will find that the Labradoodle and the Goldendoodle are excellent with them, some of the best options you can have there, while the Aussiedoodle is also pretty good, but not at the same level.

The Aussiedoodle is likely to be the least playful of the three, while the other two are somewhat better there, so once again it depends what you want from your dog.

They are all acceptable, when it comes to barking tendencies. They’re not the most quiet or loud of dogs, I’d say they’re somewhere in the middle in that regard.

With other dogs, Labradoodles and Goldendoodles will do great, while Aussiedoodles are not quite as good, so you might need to work a bit more with them.

If you have cats in the house, then the order in which I’d recommend these breeds start with the Goldendoodle (excellent with cats), Labradoodle (pretty good) and Aussiedoodle (OK).

As for their behavior towards strangers, the ones with Labrador or Golden parents will be quite friendly with them, while the Aussiedoodle is much more likely to show reservation.

If you’re looking for a dog that will let you know when strangers are around, I would go for the Aussiedoodle, as the other two will not do nearly as well in the role of a watchdog.

How much room and exercise do they need?

If you live in an apartment, the Labradoodle and the Goldendoodle are better choices, based on the amount of space they need and energy level. Aussiedoodles I’d recommend mostly to people with backyards, or to those that expect to be spending a lot of time outdoors for the foreseeable future.

Aussiedoodles and Labradoodles need a lot of exercise, and the Goldendoodles are not that far behind either. You need to be spending a lot of time with them, walking them or giving them a large backyard to run around in. They should never be neglected though, even if they have all that extra room, so make sure you spend time with them.

How much grooming is required?

The grooming requirements (bathing, brushing) tend to be higher for the Labradoodle and Goldendoodle, though the Aussiedoodle is close behind them.

The shedding level is similar for all three, a medium amount overall, so there is no clear winner there. 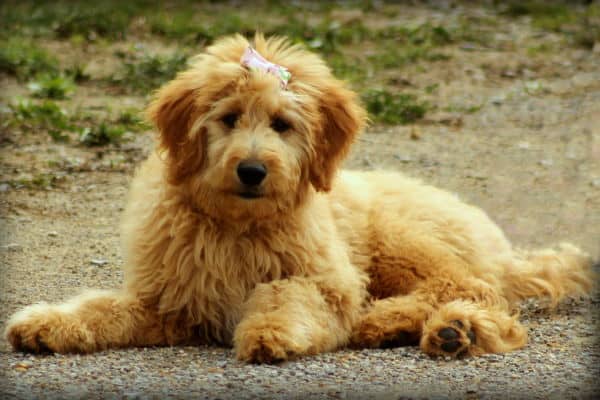 In the battle of the goldendoodle vs labradoodle vs aussiedoodle, I’d say that there are no clear winners. They all have the Poodle side in common, and the other breeds which are mixed in will be equally intelligent. Some differences do exist though, as you’ve seen above, in each section.

For apartment living: Goldendoodle or Labradoodle.

For families with children/pets: Goldendoodle and Labradoodle are once again the winners, though not by a lot.

As watchdogs: Aussiedoodle is a clear winner, while the other two are friendly with strangers.

Is there any difference between a regular Labradoodle and an Australian Labradoodle?

Yes, there is a difference there. American versions of the Labradoodle will mix only the Poodle and the Labrador Retriever. With the Australian Labradoodle, the mix adds the Cocker Spaniel as well.

What is better, an F1 Labradoodle or an F2?

With the F1 Labradoodle, you’re typically getting a bigger contribution from the Labrador Retriever, and so they’re more athletic and sometimes larger. Even with the F2 version though, you still need to give the dog plenty of exercise, that part doesn’t change.