Socializing your dog at a dog park is beneficial to your pet and yourself… you’re giving your dog the opportunity to socialize with his own kind. It goes without saying that all dogs must be accompanied by their owners. Your responsibility does not end there, however. Some owners mistakenly think that once they’re within the dog park, they can just sit on a bench until it is time to gather their pets and go home. But sitting on the sidelines disconnects yourself from your pet… and you are missing out on the opportunity to reinforce obedience etiquette for your pets.

This may have you scratching your head. What this means is that by sitting on the sidelines, your dog may be causing problems in the park that you are not aware of. By letting him roam at will, without any contact with you, he may be in jeopardy of injury. By following the few tips outlined here, you’ll ensure your dog’s safety and fun at the park while remaining under your control. It will also reinforce his obedience in the face of a lot of distraction. 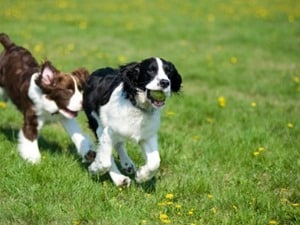 First, return your dog to his leash every so often and take him for a walk outside the enclosure. Run him though his basic obedience commands like sit and stay. Reward him, and then let him run inside the park again. This reminds him that even though he is running free with all his dog pals, it is still important to obey you.

Second, while he’s out running with his chosen pack, walk towards him once in a while and call him by name. Have him come to you for a quick show of affection and petting, then let him return to his fun and games. This reminds him that you are still the leader of his “pack” and you are showing more dominant dogs that you have ownership of your dog. It is not their place to use aggression to usurp that place from you.

Third, keep a good watch over your dog so you can avoid situations that may lead to unpleasantness and unwanted behavior. Behaviors to watch for include mounting, aggressive body language between two or more animals, and intense staring. Watch your dog for signs of being afraid and overwhelmed. Some signs are if he suddenly lies down on his back, tucks his tail in, or starts urinating while acting submissive. This is a common problem in dog parks, as dogs by their nature, root out the submissive animals from the dominant ones.