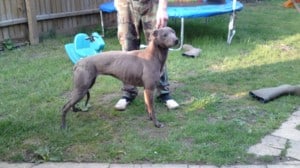 Generally, the dogs called designer dogs got this name because of them not being purebreds, but a combination between more purebreds. This is also the case of the Bullwhip, which has as parent breeds the Bulldog and the Whippet. A rather new breed. The Bullwhip has some characteristics can be determined by studying the parent breeds and what characteristics they display.The Bullwhips usually have a fine and dense coat, which can come in a single color or in any combination of black, white, red or brown. They shed moderately and require regular grooming.

The Bullwhips make quite family dogs because of domination parent traits that render them suitable for living within a home with people, such as the cheerfulness and independence of the Bulldog and the sociable nature and calmness of the Whippet. However, the aggression heritage from the Bulldog side can sometimes turn the Bullwhip into an annoying fellow.

These are products that you could need for your new Bullwhip, or for other medium to large dogs in general. These are all high quality and recommended by those that bought them in the past.

These dogs are not quite easy to train so it takes a lot of determination and patience to keep the training sessions with firm hands. In order to ease as much as possible the training process, it’s recommended for the dog to be ensured an early socialization level and training to start from the very early ages. The Bullwhip breed requires a significantly high level of daily physical exercises. The outdoors is ideal for any type of activities, so a fairly large yard or just plain open space for the dog to run and play will do.

The Bullwhip is generally a dog easy adaptable to any type of home and loves being around people, but he is also very sensitive to heat and this requires him to live indoors.The Bulldog side is a strong backup for the high maintaining popularity level of the Bullwhip, which manifests through his adorable face and the affectionate and loving nature. Although nowadays the Bulldogs are in the family dogs category, in the past things were different, as they were used for fighting bulls. These extreme abilities, along with being very devoted animals, ensure the Bulldogs are dogs loved and appreciated by many people. 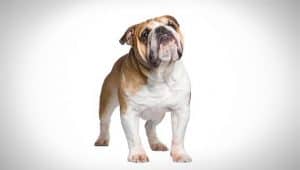 It’s easy for anyone to recognize this breed, as the unique wrinkled mug and under-bite are giving away the Bulldogs. They’re short dogs, but have heavy builds and the weight ranges between eighteen and thirty kilos. Some people still refer to this dog as a British Bulldog.With regards to temperament, the Bulldogs are very easy going and get along well with children and usually easy to train as a house pet. Intelligent and loving, this dog is also amusing and manages to draw attention wherever he goes.

Although mentally all things are pretty good with the Bulldog, from a physical point of view things are a bit different. Extremely intolerable to heat, he may even die if overexposed to heat or from too much exercising. This particularity makes it necessary for the Bulldogs to live indoors, where they can benefit from air conditioned systems during periods with warmer weather.Given the fact that is rather costly to breed Bulldogs, the puppies will also be expensive if one wants to get one. Except the heat sensibility which must be addressed by providing indoors living, among the people he loves, the Bulldog is easy to take care of and keep around a house. He has moderate exercising needs, doesn’t eat too much and having a short coat doesn’t shed too much, so only moderate grooming is required.

The Whippet is an elegant, athletic presence to have around. Even if not a proper watch-dog, the Whippet efficiently chases neighbors’ cats and mice around the house, due to his sight hound abilities. He has a short coat and is easy to maintain. 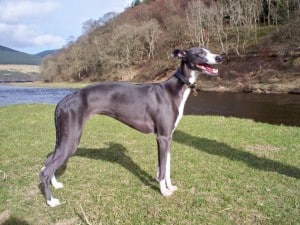 The Whippet’s birth was some time towards the end of the eighteenth century. The parents back then were small Greyhounds crossed with different types of Terriers and their offspring were expected to be able to chase and hunt down rabbits. Outside the hunting activities, the people also used them for racing between them, which lead to the phrase “poor man’s race-horse”. Although still having his racing skills, nowadays the Whippet is a calmer presence which often prefers to just lay down on the sofa.

His characteristics make the Whippet a very suitable dog for indoor living and a good pet to have around. He’s not the barker type and he is friendly to guests, although he will alert you when someone’s about to knock at the door. Despite this, he is quite far from being a guard-dog. He gets along well with other dogs as well and would even enjoy other dog’s company.

One thing one needs to pay attention when owning a Whippet is the hound spirit which will engage the muscular, athletic build in order to snap and chase any living thing that moves. In this respect, a leash will always be recommended when he’s walked, as he may forget for a few moments what he was trained and completely disregards the owner’s commands, just in order to manifest his hunting impulses. It’s also recommended to have a fair sized fence around the yard in order to prevent this dog from running away.

The Whippet is friendly and gentle dog, but he forgets to behave as such when chasing cats or other small animals. If there are already other pets in your home, such as hamsters or rabbits, a Whippet is not a very good idea. Although they can tolerate other pets’ presence if properly trained, their instinct is likely to prevail so never leave them unsupervised when together.

The Whippet can get bored if doesn’t gets enough exercises and company form people or other dogs, which can turn him a bit destructive. In order to prevent getting to this, it’s important to walk the dog several times a day and take him to dog parks a few times a week so that he gets a good chance to run around and play with other dogs. Note that his instincts can cloud his judgment and see prey in other smaller dogs. 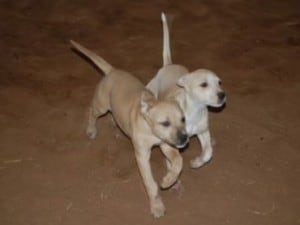 A rather funny thing about the Whippets is that they act like cats when it comes to furniture, quickly claiming cushy sofas, chairs, etc for themselves. It’s not going to be easy (or even possible at times) to train them not to sleep on furniture. Although pretty clever dogs, they aren’t the easiest to train. Positive reinforcements will help along the way and they can be used in course and agility contests where they will be top of class.

The grooming of a Whippet isn’t too complicated, especially because of the short coat which is easy to maintain, even though he still sheds. Grooming for this breed means what basic grooming means for dogs in general: trimming off the nails regularly, cleaning and drying of ears, tooth brushing.The Whippets are dogs that like and need to live indoors, where they can have access to plush pieces of furniture and can fully enjoy the presence and affection of the people they love. They cannot adapt to cold temperatures like other dogs, which is why he cannot live as an outdoor dog.